How to Trust Your Mechanic – Part 1: Frustration 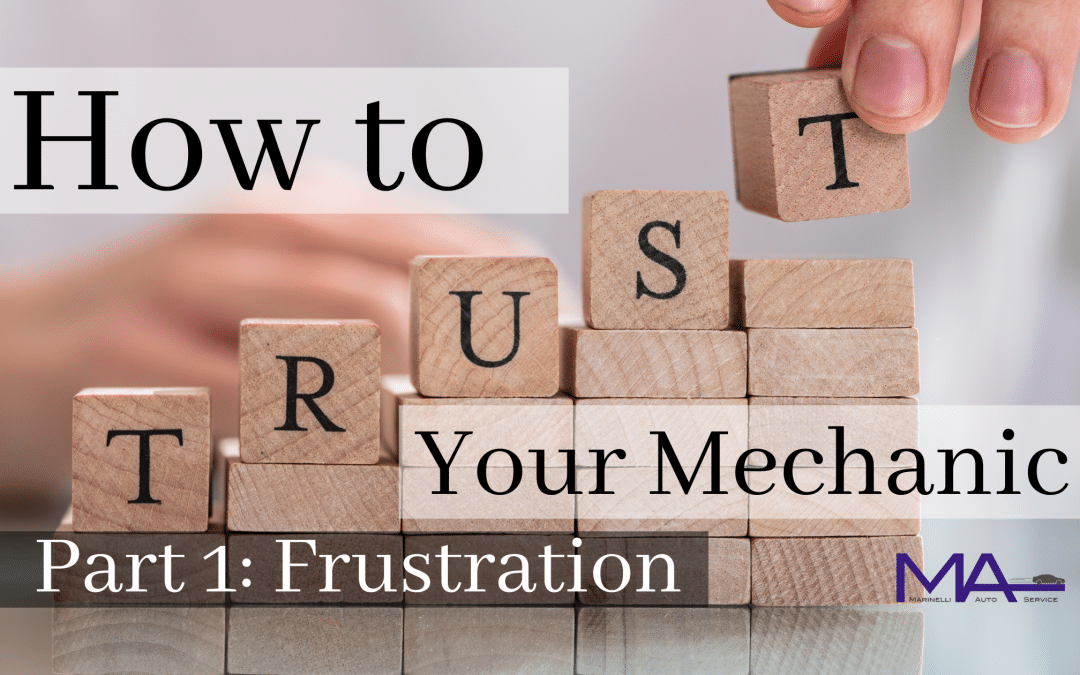 It’s common to be uneasy about having your vehicle serviced. Industry practices vary widely from shop to shop so it’s hard to know what to expect. Not surprisingly, many people have their guard up.

Most people want confidence that the mechanic will do the right thing. Fix it right. Charge fairly. Treat them well.

Maybe you’d be relieved just to find a shop you can count on to find and fix the problem correctly the first time.

We all use our past experiences and current desires to decide what paths we want to take. Automotive service is no exception. And much like other paths, automotive service paths can be short and effective or long, winding, and tiresome. If “home” is where you want to be, a path is what gets you there, right? Whether it’s home sweet home, feeling at home at your job, or feeling at home with another person, there’s always a path that got you there.

What does “home” mean for automotive service? How about meaning that you’re in a good place? A good place with both your shop and your vehicle. Lack of surprises, good communication, confident vehicle ownership, and a safe, reliable vehicle.

How long will your path be to get home? 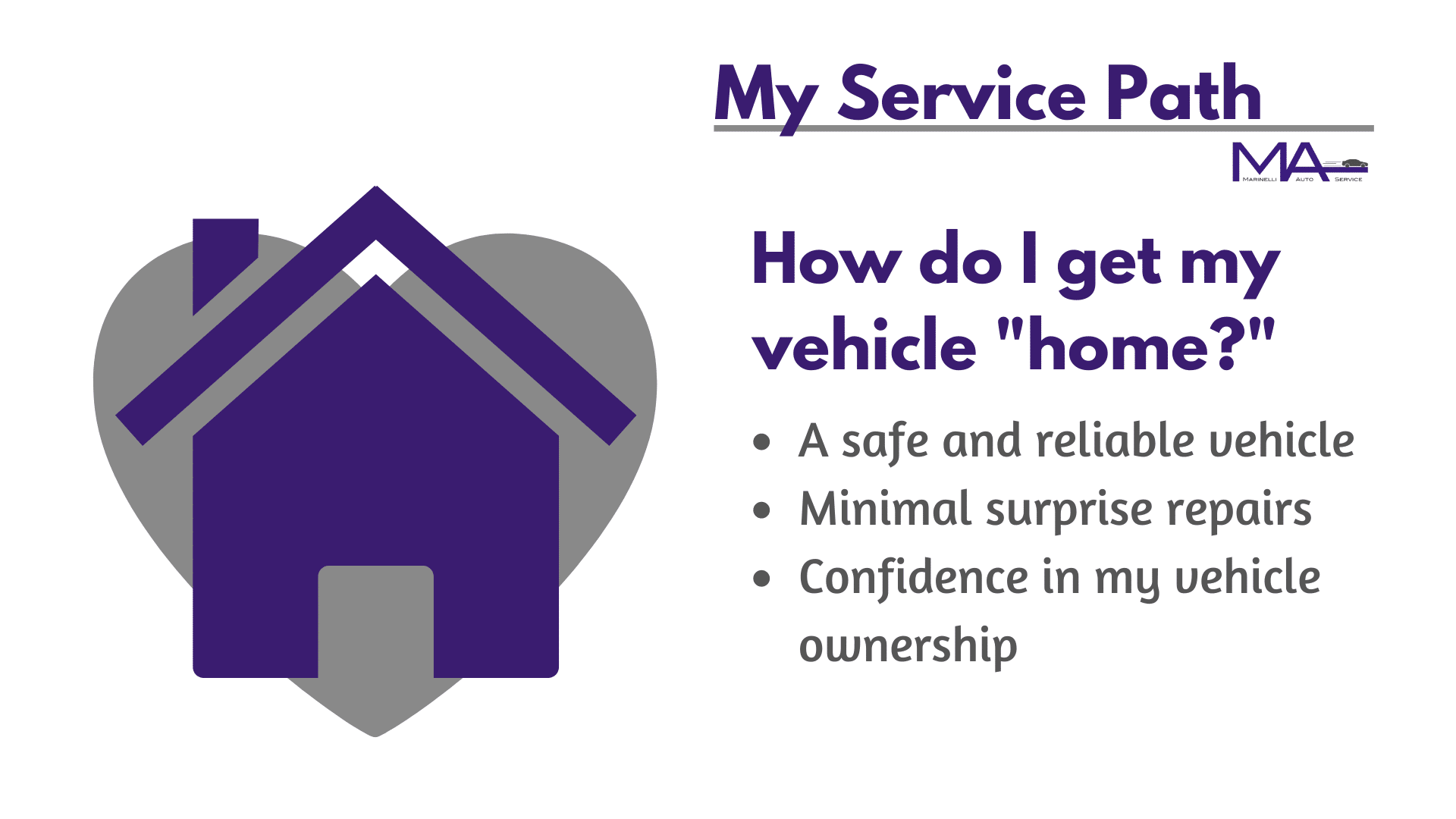 To illustrate further,  let’s pretend that each owner has the same kind of vehicle with the same mileage and problems. Those problems are:

Item #1. Shaking while driving. This is the only symptom the owner is conscious of.

Item #3. One of the front suspension struts is leaking.

Item #4. One of the steering tie rods is loosening.

Item #5. The battery is about to give up. (The owner is unaware because the car still starts.)

5. I want what I want and nothing else.

Except he doesn’t get what he ultimately wanted. His car is still shaking just as badly as it was before.

At this point, John may question the quality of the alignment that was done. He may return to the same shop, or he may try another one if he’s dissatisfied. Either way, the car is still shaking so it goes in for service again. This time, he clearly articulates that he wants the shake to go away, which is resolved by some good tire balance work. When the shop inquires whether he’d like to have the vehicle inspected, he declines.

While the vehicle was being serviced, the mechanic noticed that one of the front struts (item 3 from above) is leaking. But John doesn’t want to hear about it. The car still feels “ok” to him.

Two months later, John’s car doesn’t start. That weak battery (#5, which could have been caught during a proactive inspection) now fails to start the car. He tows it back to the shop.

The shop notices John’s empty coolant reservoir. They suspect an engine cooling system leak (#2), but John refuses to have it checked out. He wants what he wants (the battery this time) and nothing else.

Three months later, John’s car overheats. That radiator leak (#2) has caught up with him. The car goes back in for service.

While the car is in the shop, the mechanic notices that the right front tire is bald on the inside. Now John is particularly unhappy. He paid for an alignment (#1) five months ago so why does his tire look like this? (Little does John know that the alignment couldn’t hold because he has a loose steering tie rod).

John now has to pay for a tire and yet another alignment, but for the alignment to hold he needs that steering tie rod replaced first. Once again, the leaking strut is noticed, but John is already frustrated with the situation and doesn’t want to hear about it. He has the tie rod, tire, and alignment concerns resolved.

Six months later, John notices a strange noise when driving over bumps. The car goes back in for service yet again. The noise gets pinned to the strut that was previously seen leaking. John approves replacement, but then he gets the news that the alignment will have to be adjusted again per the strut replacement. Since it’s a required part of the repair procedure, he agrees to paying for a third alignment.

It has now taken six visits, a no-start, an overheat, and two extra alignments for John to get his vehicle “home.” And John? He doesn’t feel at home at all.

Maybe he’s gone to the same shop for everything and perceives that their recommendations change with each visit or that they should have warned him better. Or maybe he never went back the first time and he’s bouncing from shop to shop in pursuit of what he wants. Regardless, he’s not having a pleasant experience maintaining his vehicle.

This cycle only gets broken if John’s mindset changes. Perhaps he will change it himself, or perhaps a shop will engage with him in a way that gets past that barrier: “I want what I want and nothing else.”

As stark as it sounds, vehicles are machines. They need what they need when they need it, and those needs are often there waiting for discovery and communication by a competent and honest shop. “I want what I want and nothing else” will often result in a long path to get your vehicle home, and you personally may never feel “at home” yourself.

4. I want what I want but tell me if you see anything wrong.

Susan is fairly confident that her car needs an alignment because it’s shaking. She’s been overcharged and treated unfairly in the past so she comes to the shop with a desire to control the process. However, she realizes that she doesn’t know everything her vehicle might need. She’s ok with some extra information as long as it’s free.

To Susan’s credit, when the shop asks her why she wants an alignment done, she mentions the shake concern. They advise her that the alignment is not a primary suspect, and after some good wheel balancing, her shake concern is resolved. The shop also notices the leaking front strut.

Susan doesn’t take offense to hearing about the strut, but she’s not that concerned about it because the car still feels ok to her. Needs 2, 4, and 5 have not been observed yet.

Just like John, two months later, Susan is back in the shop when her battery fails. Also like John, the shop notices the empty coolant reservoir and advises that the cooling system might be leaking. Susan approves paying for evaluation of this concern which leads to the radiator leak, and the battery and radiator concerns are resolved. However, when the shop approaches Susan about having the vehicle inspected, she declines. She only wants additional information if she gets it for free. She still isn’t that concerned about the defective strut and still doesn’t know about the loose steering tie rod.

Three months later, Susan returns for an oil change. The mechanic notices that her right front tire is bald on the inside. Susan agrees to have the tire replaced and the alignment corrected, but she still declines inspection done prior to the alignment. She thinks, “Last time I approved an inspection like that another shop tried to sell me work that I didn’t need, and the car has felt fine since then.”

Six months later, she notices a strange noise when driving over bumps. She takes the car back, and the noise gets pinned to the strut that was previously seen leaking. However, her right front tire is wearing out and unevenly again. During this visit, the leaking strut is replaced, the tire replaced for a second time, the defective tie rod replaced, and a second alignment done.

It has taken four visits, an extra tire, and an extra alignment for Susan to get her vehicle “home.”

How is Susan doing? She acknowledges that the recommendation to inspect the vehicle before the first alignment was legitimate. It would have saved her money! But even though she doesn’t say it, she wonders, “Why were they willing to align the car and take my money for that if they weren’t confident that the alignment would hold?”

Susan is feeling better than John is, but the repeated visits to the shop have worn on her as well. She feels apprehensive that even in an honest shop, surprises could come after the vehicle is signed in.

Find some relief and learn about service paths 1, 2, and 3 in Part 2: Feeling At Home. Coming soon!