Me & My Ride: Billy & Morgan Kuehlewind 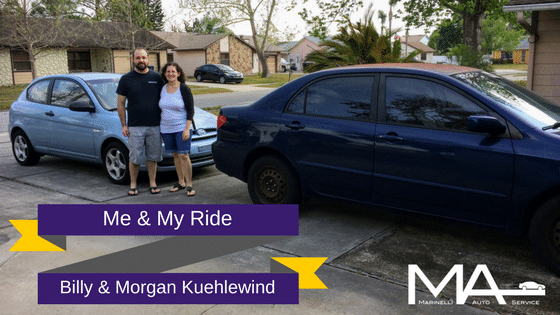 Adventure loving couple, Billy and Morgan Kuehlewind, bring tons of fun into our shop. From Billy’s tactful sense of humor to Morgan’s contagious energy, we look forward to the Kuehlewind’s visits.

Billy works in audio visual and Morgan works at home with baby Liam as a freelance math textbook curriculum writer. Their life looks pretty average now, but they spent the past few years working for an international non-profit organization that took them to seven different countries. Now that they are settled into a more traditional lifestyle, they enjoy visiting their extensive network of family and friends in their 2007 Hyundai Accent, the non-baby two door manual car, and their 2006 Toyota Corolla, which they dub the “baby limousine.” This is just a tiny peek into the fun this couple brings to any conversation.

Our relationship with Billy and Morgan goes back further than the shop, though. Billy and Andrew were roommates when Andrew was studying to be an automotive technician and recalled a time when he went somewhere and was told to take care of something which Andrew was quickly able to advise that his car doesn’t even have! Well, the more he heard Andrew talking about how he operates as a mechanic, the more he saw that he was a guy he could trust. Both Billy and Morgan were excited for us when we opened the shop and became some of our first customers.

As it turns out, the Kuehlewinds trust us so much that they have dubbed themselves “Marinelli Auto Service Evangelists” and share their testimony of their first experience with us every time they recommend us to someone. We certainly owe a lot of business to them, for which we are incredibly grateful.

It all started in March 2015. They had been working with a non-profit organization that took them all over the U.S. as they raised funds and then all over the world, so they had downsized to one car – a 2007 Hyundai Accent. Their house had recently sustained flood damage, so Billy was forced to stay home from a work trip to North Carolina and Morgan went by herself. She was nearly back home when she realized something was wrong. Thankfully she was able to safely pull over and call Billy, who came to pick her up in a rental. Now they had to figure out what to do.

They called Andrew, and upon his advice, they took the car to the used car dealer where it was purchased, along with a service package, hoping whatever was wrong would be covered. Knowing some of the mechanics there, Andrew told them who to ask for to work on their car.

Billy reflects, “I remember [talking to Andrew about how frustrated he was with the state of the whole auto industry. People weren’t honorable and cutting corners and stuff and, I don’t necessarily think that’s unique to that industry.

“For him to say that he knows a guy at the dealership that does good work, ‘So if you are going to have it done there, go to him knowing that other people cut corners, but this guy does it right. He’s the one you want,’ it’s counterintuitive. You’d think he’d say, ‘You can’t trust anyone there, you should bring it to our shop.’ But he said, ‘If you have it done there, here’s how to do it.’”

As it turns out, the repair would not be covered. Not only that, they suggested junking it with them for $500 but couldn’t show them any comparable vehicles for a price they could afford. So, they brought it to Andrew who diagnosed and repaired the major internal engine damage caused by the failed timing belt.

The Kuehlewinds realized that they wouldn’t have been able to get a car as good as what they had for the same cost as the repair.

She continued, “That was in 2015 and it recently just crossed over the 140,000 mile mark. We had a lot of life left in it, so it was totally worth it to fix it than to junk it. I love that Andrew’s philosophy is, ‘If you want to run the car until it’s dead, I’m going to help you do it.’ That’s really encouraging because we’re in the mindset of, we don’t want to replace it unless it’s necessary. Cars can go a lot longer than people think. You just need someone who can instruct you on how to care for it, especially when it’s a little older.”

The crux of their testimony comes when Billy brought the vehicle back in for routine maintenance and Andrew decided to check his previous work.

Billy tells people, “He noticed this tiny leak that I would have never seen or checked for and he was like, ‘Ooh, that’s what I worked on!’ So, he took some extra time, under warranty, to reopen it and get a new head gasket and reseal it. I tell people, he’s completely honest. He saw something that I would have never noticed, he looked at it because he was in there for another reason, and said, ‘I need to make that right.’”

After that experience, Billy and Morgan knew that they would continue bringing their cars to us. They even ended up buying a second car – the Toyota Corolla – from one of our customers because they knew the previous owner was on top of repairs and maintenance and had trusted us to help them take good care of it. Both their Accent and their Corolla have gone through our Comprehensive Inspection in order to reveal any issues their cars might have and prevent any problems like those they had with their Accent before they came to us.

Morgan explains, “Andrew understands people are on a budget, so we had him do a Comprehensive Inspection. He makes a list and sorts it into what needs to be done now, or in 6 months, or a year, and you can save up for and plan for it. We’re budgeters and planners, and it’s better to know it has to happen rather than be surprised. So, if I was going to recommend a service, that’s what I would recommend.”

Billy and Morgan are certainly A+ customers, but they are also fun and genuine people. It’s because of people like them that we do what we do and feel good about the service we provide.