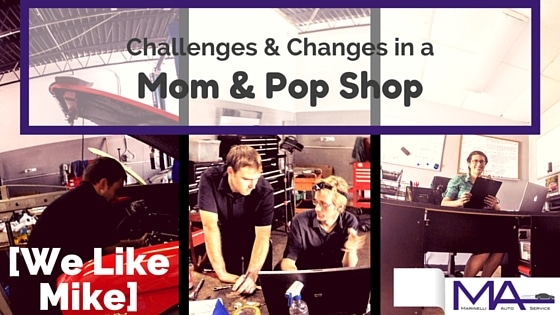 May was an exciting but frightening month at Marinelli Auto Service. Business in the auto repair industry tends to ebb and flow in seasons. April was quite slow…maybe due to people focusing on paying their taxes? Then May came and BAM! We had more work than we knew what to do with. We knew we needed to make a change because we wanted to provide the same level of service, or better, to what we’d been providing over the previous 17 months of the shop’s existence. Increased customer needs meant long work hours and little sleep for Andrew. I was doing everything I could to support him as I continued to learn everything I could about this new industry. I’ve never worked harder in my life!

Learning how to manage a business while still being attentive to each person who drives over to our shop takes a lot of work. Owning a business is a learning process no matter how much or little you know about business. It requires many carefully calculated decisions to make sure we are spending wisely, managing overhead, and properly equipping the shop. (Tools and equipment are an on-going expense in our field). We also have to make long term decisions regarding pricing policies and practices, and day to day decisions as we estimate costs for customers. We have no desire to charge “to the max,” but if we don’t charge enough, we may not be around to serve you later!

We’d been wondering, “Can we afford to hire another mechanic?” We had someone in mind and he was ready when we were, we just had to make it work financially and logistically.

On June 1, 2016, we brought on Mike Traher to Marinelli Auto Service. As soon as we did, the phone began ringing off the hook to the point where we had to make another big decision: to add a second phone line, which was a significant addition to our monthly expenses. However, it was a lot better than constantly returning your phone messages or waiting for one of us to get off the phone in order to make an important call.

All that to say…meet Mike!

Mike got into the industry after a brief stint at the University of North Florida where he wandered around wondering, “What in the world should I do with my life? I had no direction and was failing because of it.” He thought maybe this going away to college thing just wasn’t for him and realized he wanted to do something more hands on. He heard about the automotive program at Seminole Community College (now Seminole State College) and was convicted that this was the direction he needed to go, so he switched schools to pursue an education closer to home. It was in class one day where he met Andrew and they hit it off and have been good friends ever since. In fact, they followed each other around to different automotive jobs and found they worked really well together. I’d say they go together like peanut butter and jelly.

“I’m a problem solver,” Mike explains, “So, I really like going at an issue and trying to figure out how to fix it. Whether that’s finding out how it works and finding out how to test it or using some other tried and true method.”

Mike is an excellent diagnostician who is able to figure out what’s wrong with a vehicle that leaves most others scratching their heads. He’s particularly good at diagnosing electrical issues which is why he’s concurrently pursuing a degree in electrical engineering in his off hours. In fact, Andrew will tell you that he thinks Mike is one of the best automotive technicians in the state of Florida.

Now that Mike has been here for over a month, I thought I would ask him what he likes about working with us.

He replied, “I feel the freedom to do things the right way here. There’s no pressure to cut corners [like in some of the other jobs I’ve had]. I wouldn’t have cut corners anyway, but the pressure was there.”

I can tell you why I like having Mike here, as well. Other than the fact that he’s been a good friend to Andrew and I over the years, Mike brings a great balance to the shop. When things get stressful, he is a calming presence. In fact, being such good friends, Andrew and Mike are often found razzing each other and spouting out jokes to one another in the shop when the stress of the job gets high and they need to lighten the tension. On a more serious note, Mike also brings with him a solid moral character and we can truly trust him to take good care of our customers.

Also, I like seeing Andrew smile throughout the day. I like being able schedule people in the shop a lot sooner and not worry about Andrew working ridiculously long hours and losing out on sleep to keep up. I like no longer getting behind on paperwork. I like having another person to learn from so I can become increasingly more helpful in the day to day operations of the business.

A year and a half ago, the shop barely made enough money to bring home a profit. Six months ago, the shop started supporting Andrew and I both full-time. Today, the shop feeds three people full-time. It’s not without it’s challenges and we still get nervous when business gets slow, but we’re hopeful that the shop will be enough to feed four in 2017.